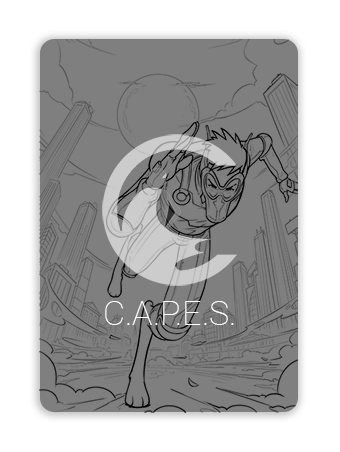 Young boy of Latin origin, CAPES believes that Speedster is an advantageous spin-off from the Theory of Human Evolution.
His power lets him transform his lower body into a kangaroo-like form empowering speedster to run and jump at supernatural speed and heights.

As his powers are all about foot placement and landing, Glimpse approached him with the gift of the Speedster-unique eyewear we see today. This Artificial-Reality device helps Speedster gauge the range and density of the surface he lands on for him to make a clean and stable footing.

Speedster can jump several hundred meters vertically and horizontally, even with extra weight, provided he can lift the weight.

Speedster possesses astounding kineticism and has the reaction time to match his speed. He has profound acrobatic skills along with incredible reflexes that lets him avoid any incoming obstacles with precise and delicate movements.

His superpowers are steadily growing stronger, although he fears that at the peak of his power, he may not be able to his full human form.

By training for hours everyday, Speedster is learning to use the strength of his feet in combat and is focussing to acquire the power of instant acceleration.

Speedster employs a smart combination of runs, jumps, flips, dashes, slides etc for various purposes like rescue operations, reconnaissance, avoiding enemy attacks and everything that requires his agility and quick-thinking.

Though the AR-eyewear is used for the correct evaluation of his speedy movements, Speedster makes the best of this device for scouting threats, endangered civilians and for general awareness

Be part of the game before its launch and collect advantages that will give you a heads up! Your first starter deck is offered when you buy a Speedster NFT: mythic, legendary or epic.