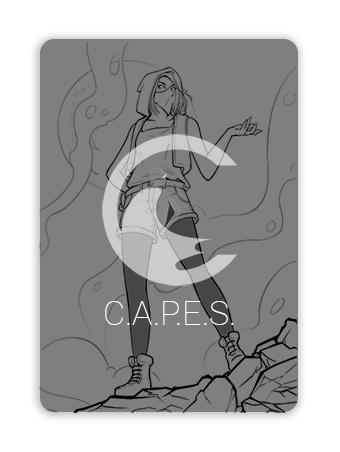 Ennui’s powers are a quirky mixture of emotions and digitisation, seemingly impossible in the modern world of social media and omnipresent digital connection.

Ennui’s subconscious influence on others has made her paranoid. The two-faced nature of the world around her, that she can easily sense, has pushed her to the brink of losing the trust on human beings, for good.

So to her belief, the only choice she is left with is to control her emotional state and powers, in order to shield people’s emotions from being sensed by her. Furthermore, Ennui prefers to stay aloof and maintain a very muted emotional state, though she misses being a social icon.
With the sudden onset of her powers, Ennui experienced extreme modulation of contrary emotions like ecstasy, depression, apprehension, hysteria during her time as a teen. This was time when she was approached by Akasha to join CAPES in order to learn to channel and accentuate her gift of transcendental emotional intelligence.

With a certain amount of focus, she is able to establish telepathic links and pass short burst of energy to heighten or suppress those emotions.

This has often helped Ennui to reason out, calm down and express optimum empathy towards people

Be part of the game before its launch and collect advantages that will give you a heads up! Your first starter deck is offered when you buy an Ennui NFT: mythic, legendary or epic.